If it’s a great game of blackjack you’re looking for in Las Vegas, you need to look no further than El Cortez. The El Cortez Hotel and Casino is widely renowned by experts in the game and avid players alike as the single best blackjack game you’ll find in the Las Vegas city limits. 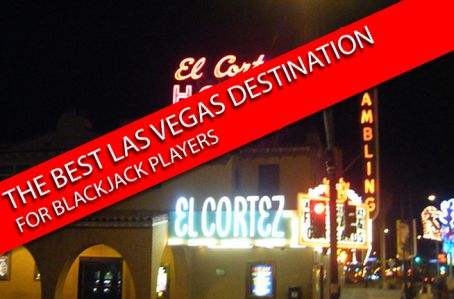 With a 3:2 pay-off and a single-deck game, the house advantage at El Cortez is just under 0.2%. It’s the lowest house edge you’ll be able to find anywhere in either Downtown Las Vegas or along the Vegas Strip. Because the game is a single deck game, it’s almost always manually shuffled, avoiding the increased time for players to lose their winnings that some players have seen with the innovation of Continuous Shuffling Machines speeding up the process and adding hands.

While there are some other tiny hole-in-the-wall places such as the Alamo (a tiny truck stop area away from the Strip) also have 3:2 payoffs with single deck games, these places are all strictly low-stakes games, with limits being set anywhere from $5 to $100. The El Cortez, however, does not limit itself to these small betting options, making it a far more exciting and potentially far more beneficial game.

In addition to its praise for having one of the best blackjack games in the country, it’s also been praised for its quarter slots and other games, as well.

With their low house edge, their exciting games, along with their reasonably priced rooms and rentals, it’s no wonder that the El Cortez has been deemed one of the best blackjack hot-spot destinations for serious players from all around the world. With the El Cortez excitement buzzing from sources and bloggers all over the world, it might just be worth checking out this classic hotel and casino the next time you’re in Vegas.